Voice assistant technology has over time become weaved into the devices we use every day. From requesting simple mobile functions like calling a friend, to more detailed internet searches, the prevalence of voice assistants has become an integral feature for almost all mobiles, tablets, laptops and most recently, speakers. The internet is no longer at the touch of a button, it is now merely a question away.

As this type of technology continues to improve, its use becomes more and more common for more and more users. I have to think hard to remember the last time I took the laborious route of using my fingers to call my mum. Asking Siri is much easier. This increase in the reliance of these technologies is inevitably followed by the need to monetise it, and Google may not be far behind with its large sack of wealth slung over its shoulder. In this vein, I thought I would explore the possibility of seeing paid search results coming to voice assistant searching, in particular Google Assistant, and how you could prepare your PPC accounts for this new wave of paid search.

What is a voice assistant?

For those who don’t know, voice assistants are digital technologies which use voice recognition software to aid device users. These technologies use a combination of language processing and voice synthesis to understand an oral request by the user, process this request, and provide a relevant and accurate response. Typically, voice assistants are limited in functionality, but as time passes and developers learn more about both the billions of requests made and the technology used to process them, the more sophisticated they have become. Essentially, this technology is activated by one of two ways: a spoken phrase, such as “OK Google” or “Hi Siri”, or by holding the home button of some mobile devices. Their functionality ranges from each brand of voice assistant, but should allow the user to ask the device to complete basic tasks such as write a text or call an individual, or to conduct an internet search such as searching for images of cute cats.

One of the earliest examples of this technology is Siri, seen very much as a founder (and overlord) of the voice assistant market. It was integrated into the iPhone 4s and released by Apple in October 2011, although it had existed a couple of years prior. It has since been joined by other voice assistants in an attempt to compete in a widely competitive and growing market. The most prominent of these is Google Assistant, which was launched in May 2016, and Google has recently claimed it is now part of almost one billion devices. Other voice assistants also include Amazon’s Alexa and Microsoft’s Cortana. In this article, I will be focusing primarily on Google Assistant.

Are there search ads in voice assist searches?

But how does this all relate to paid advertising? The link really is simple. As the prevalence in the use of voice assistants increases, users are no longer turning to their keyboards to find out local information, they are instead speaking to their devices. I find it much easier to ask Google where my local McDonald’s is (in the apocalyptic event that I have somehow forgotten) than unlock my phone and type my request into a search bar. Similarly, I’m sure many homeowners who have an Alexa speaker will be more likely to use voice search when looking for information about a local business. A study by Bright Local in April 2018 found that 58% of consumers have used voice search to find local business information in the last 12 months. 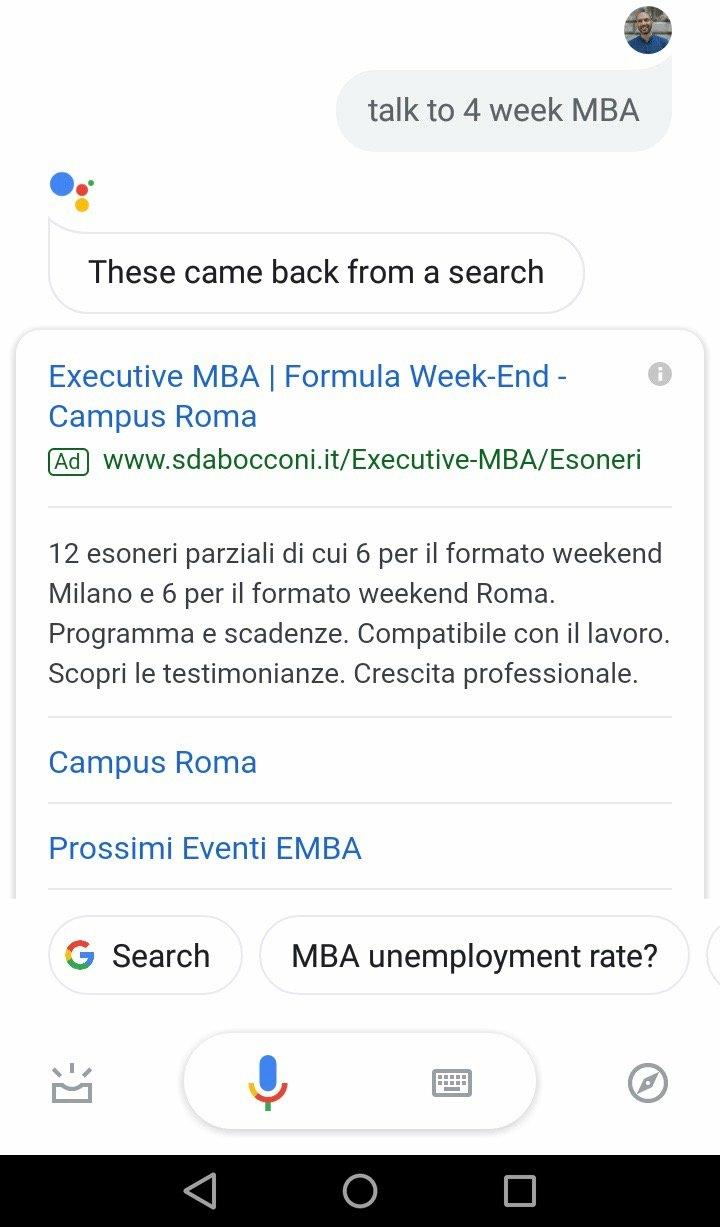 The major point here for paid advertisers is that typically a voice assistant search will return one of two types of result. The first is where the user views the results on the screen, whereby the assistant will provide a range of choices to choose from. Or, it will read back to you one single result (meaning you have to move as little muscle as possible). Currently there are no paid advertisements for Google Assistant, but images released on Twitter have revealed that Google has been testing search advertisements for this technology.

Now imagine a world, a not too distant world, where Google releases paid advertising on voice assistant search. Each relevant search returns one result, with that result being an advertisement, meaning click-through-rate for those ads increases, directly impacting your return on investment. This is by no means an unrealistic prophecy whereby digital marketers will have to actively consider the influence their ads will have in voice assistant searches; ads which will no doubt be relatively expensive considering their single prime position.

Now as this is currently a prediction, rather than a reality, it may appear that I am jumping the gun. But it is in many ways an inevitability that Google would hope to monetise a technology which is being used by so many devices across the globe. And there are certain tasks you can undertake to ensure you are best prepared for the revolution, not so much creating tin hats to protect yourself from the imminent alien invasion, more so realistic audits you can make to your current PPC accounts.

The most important part of your preparation should be to consider your negative keyword lists. It is not uncommon for a PPC account to include in their negatives a range of adverbs which pertain to a question: how, when, where, why; as they typically indicate a user who is in a research phase rather than in the market to actively buy. Your negative lists may also include a variety of local phrases such as ‘near me’. Your first step should be to review these negative keyword lists when the time comes to prepare your account for voice assistant ads. Removing such terms will aid in your ads appearing for typical voice searches.

You should then also consider your current keyword lists. Put yourself in the shoes of someone who is using a voice assistant – I know you’ve done in the past. Searches tend to be longer when using voice assistants so it may be important for your lists to accommodate this. Considering long-tail queries is an important step to ensuring your ads are in the best position to appear for voice assistant searches. If you manage a PPC account with a large amount of historical data, you could even go so far as downloading a list of search terms over the past year for example, and using an Excel sheet, filter the queries by those which include voice assistant phrases, such as “OK Google”. This could prove to be useful in determining the conversational tone users are adopting when using voice assistant search rather than typing out a search query.

For many digital marketers, the prospect of paid ads coming to voice assistant search offers a new platform to explore the potential power of online advertising. It is not an inevitable outcome however, that these ads will provide an instant success to this type of technology. The act of speaking to your phone or your speaker creates a greater personal connection to the device, whether you are aware of it or not. That is not to say that in the not so distant future that you will be taking your device to see the latest Marvel movie in the cinema, but it does mean that we place, knowingly or not so, a certain level of trust in our voice assistant technologies.

We also use this technology for convenience and also for speed. Rather than having to fish your phone from your pockets, or make the arduous trek across your room to your computer, voice assistants provide a convenient way to search the internet, or to make a quick call to your local Domino’s without having to lift a finger.

The introduction of these types of ads could have an adverse effect on the relationship that is created through your voice assistant. If it is convenience you search for when using Google Assistant, but it returns an ad which is only partially relevant, could it deter you from using it in the future? Whether or not you are aware of the personal element of such searches, could the introduction of these ads begin to break down the trustworthiness of these technologies?

There is a long way to go before these types of ads are even available to digital marketers, but with evidence that they are being tested by Google, they cannot be too far over the horizon. With it brings a range of unique issues which will have to be addressed before their widespread rollout. Whether or not you believe they will be a good or a bad addition to the ever-expanding world of PPC, paid ads in voice assistant searches could be the start of a whole new type of advertising on Google.

How Google Analytics Can Help You to Increase Leads and Sales

How to Discover Your Online Competitors