Starting with the US, Bing is removing text ads from the sidebar in desktop search results as of 26th March. The search engine is following in Google’s footsteps in a bid to increase clicks on ads on the main part of the page. An extra ad will be added to the bottom of the page, allowing four ad to be shown below the organic search results. 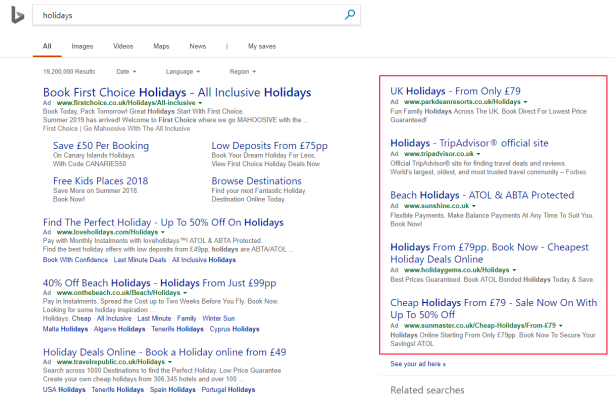 The ad slots on the right hand side highlighted in red will be removed from search result pages.

What Is Going To Change?

Sitelink extensions are not available for sidebar text ads, so the move means that all ads will now be able to use the same features. The change will also make the desktop search results pages look similar to those on mobile.

Shopping ads will still appear in the sidebar where relevant. The changes apply to Bing search results pages only, and do not affect Yahoo or AOL.

How Will This Affect My Ads?

Google made a similar change in February 2016, removing ads in the sidebar and adding an extra an slot to the top of the search results page. There was some concern among marketers as to whether this would negatively affect PPC campaigns, but according to a report from Search Engine Land, very little actually changed. It was found that click-through rates increased, which was to be expected as Google added an extra paid ad to the top of the page. The ad in the third spot received the biggest boost thanks to the new layout.

However, aside from that there was little mayhem to report. Costs per click remained stable, as did traffic, and while impressions decreased particularly for ads in positions 8-11, those positions made up just 0.2% of impressions.

Bing removing their sidebar ads might not have the same effect as when Google removed theirs, so the above may not necessarily be true this time around. It is difficult to predict exactly how this change will affect your advertising until it happens, but for now we can still keep an eye on the effect the changes are having in the US.

When Will The UK Be Affected?

These changes are being rolled out in the US initially, and will be tested out in other countries at a later time – so this does not yet affect UK advertisers. However, when it does, it will be important to keep a close eye on your campaigns so that you understand how the changes are affecting your account, and then you can make adjustments accordingly.

How To Increase Your PPC Conversions